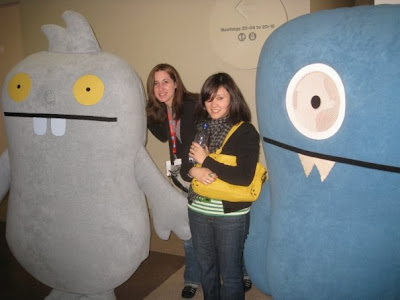 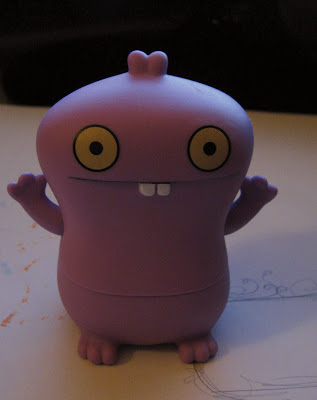 So I thought I would briefly document last Saturday at the Comic Con. It was my first time there. I mean I kind of knew what to expect. Superheros and whatever sci-fi geeky-ness in existence may show its presence there. And so it did. There were some storm troopers, a tall pretty realistic Chewbacca, a trashier looking Leia, not the hottest Han Solo, tons of anime kids dolled up in their very favorite character attire, individuals who claimed to be zombies who went about offering free hugs, and tons of superhero marvel dc types that I couldn't even begin to name being that I had no idea who some of them even were, oh and a batman, who walked about on his cell phone. It was a day were anything went in the comic world. Seriously you could go there in your hottest tightest corset and carry some sort of weapon all dolled up in a bright color and it worked. Maybe some it didn't.
I found it all pretty exciting for the most part. I didn't really enjoy pushing thru thick walls of people or people who barely moved but when they did it seemed to be timed just as I was squeezing thru.
I had two great highlights of the whole show tho. The ugly doll booth which was an explosion of color and soft squishiness and meeting Sam Brown, artist of www.explodingdog.com. I am sure I could totally word this in a much more exciting way but it's getting close to my bedtime and I am pooped. I remember walking up to a table drawn to all these neat little characters. The artist from creatures in my head was sitting right there being bombarded with people asking him to draw them something. I looked over to the side of him and it kind of registered rather slowly that the familiar prints laid out nicely in sleeves were none other than Sam Brown's who was standing right there! I was soo delighted. I had to buy print! It's just nice to see an artist who's kind of like you in many ways..doing what they do best and just having people acknowledge you and know your stuff. That would seriously be enough to make me happy for a lifetime. Ofcourse someone actually deciding they want to buy your stuff is a great perk too. After seeing him it pretty much was the end of the show for me. I got to buy a cute shirt at Gama-Go which is another one part Tim Biskup who I love, but he was not there. I also got to have my picture awkwardly taken with lifesize uglydolls which was just strange and werid because they are soo cute and you want to hug them but totally have to refrain from doing so because it's a person in a costume.
Anyway, I walked out of that place with a signed print from Sam Brown, a cool t-shirt from gama go, the cutest little vinyl uglydoll as well as a nice new soft one. It was a day worth having sore feet. I think I might just go to the next one that comes around.
Posted by Liz Urso at 10:34 PM No comments: 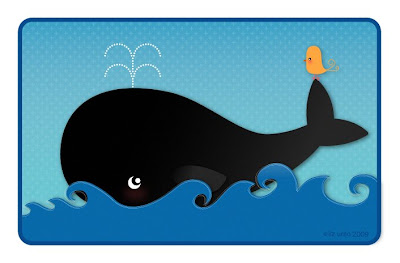 Just been in the mood for whales...and birds...who doesn't like a good whale and bird...aye
I'm totally out of witty quirky things to say if I ever had any. I think winter really is starting suck the life out of me. I'm am sooo running out of steam and I got the longest mental list of things that need some serious getting worked on. I need a little army of elves to help me get things done or started for that matter. I would feed them an endless supply of cookies...who doesn't like that!

The weather has been toying with me the past day or so where it's not below 30 degrees at least during the day. It actually hit 50 and I hear it could reach 60 sometime this week. I am anticipating spring. I can't wait for spring where it will be nice and warm but before that happens I hear we also got some snow coming next week. Oh yay.
Posted by Liz Urso at 10:18 PM 1 comment: