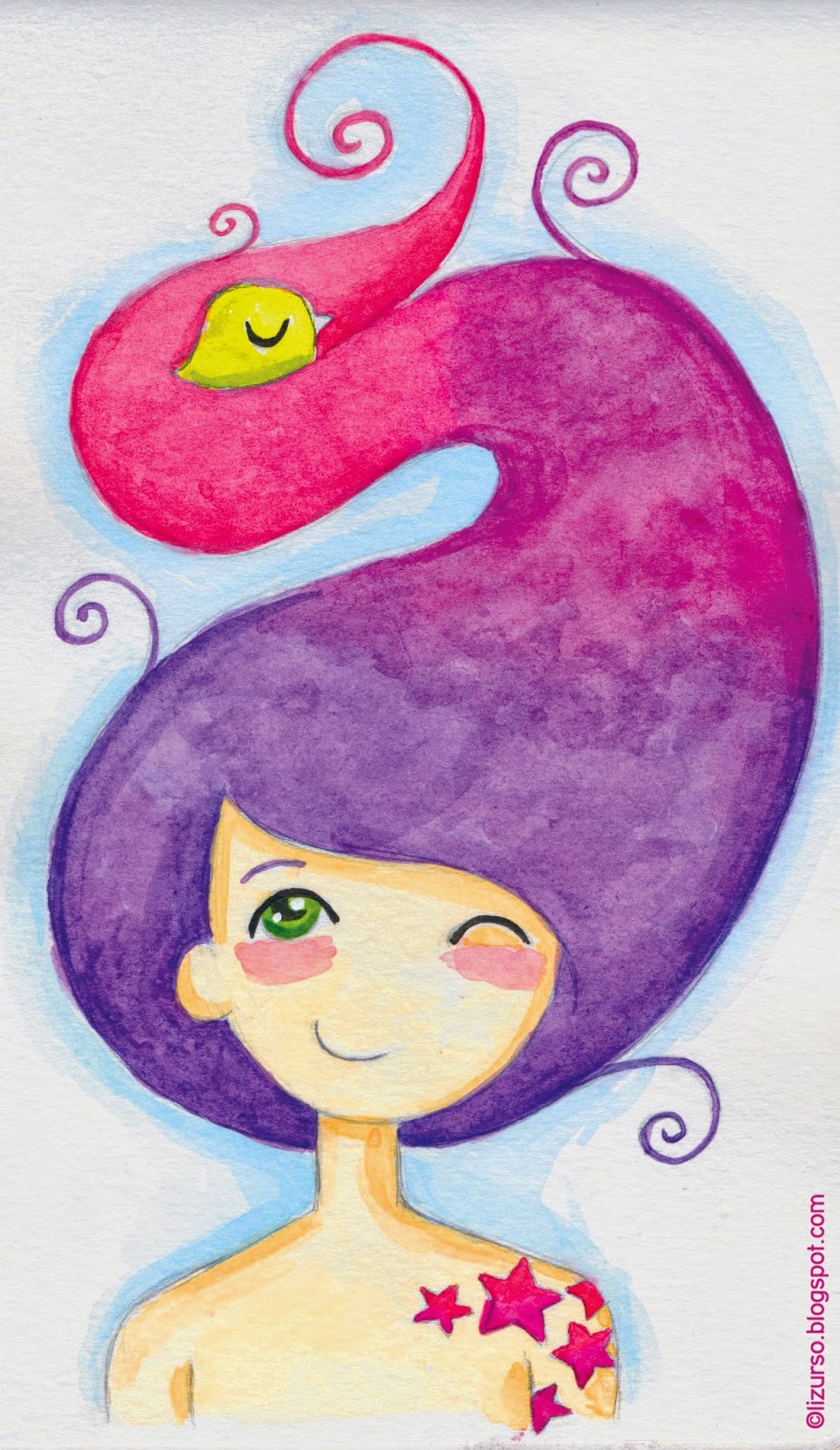 A little doodle watercolor of myself for this week. 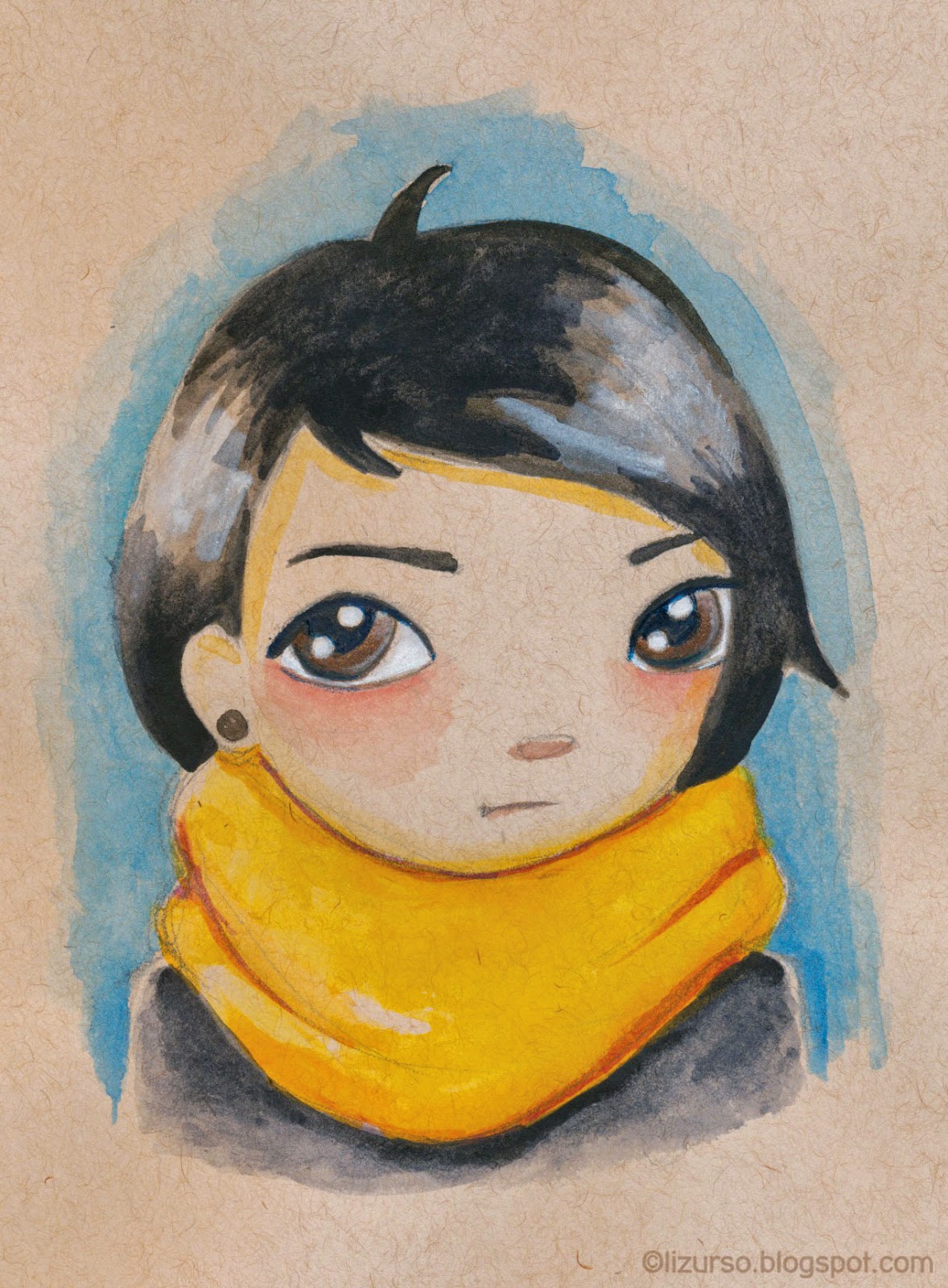 Here's a little story to go along with this weeks watercolor or maybe here's a watercolor to go with an semi unfortunate thing that happened back in November.

A couple of months ago I had visited my friends who have lovely home in Michigan. This is my second trip out there. First time I was there was at the tail end of summer but this year we ended up planning a later trip in the fall. It was only early November but it was pretty brisk and there was a potential threat of the first Michigan snow hitting just short of us heading back home to Jersey. I remember standing around in their yard admiring nature's little gems, the acorn. Sure I could get acorns back home but these Michigan acorns just looked way more magical and there wouldn't be a chance that I would find myself in the woods once we got back home. Why did I want acorns? I was thinking about any potential craft project where I could use them, maybe even this upcoming ornament swap I would be involved in a few weeks later.  So I gather a small handful but not too much as I knew I wasn't really going to be doing much with them.

A few days later I was back home working sketches for a new drawing. It gets pretty messy working on the floor so I find myself constantly picking fur balls and paper bits off the rug. As I sat there scrambling about grabbing little debris here and there I reach and grab a white squishy ball. I'm pretty puzzled as I couldn't quite figure out what I was working with or maybe eating that would be soft and squishy. Clay? Rice? Hmmm.... I take a closer look and immediately yelp at this little squishy ball which happened to be a curled up grub worm! I drop the critter on the floor and freak out. It's not a good sign to find a worm on your floor! A few inches over from where I found the little grub was yet another! I start to panic that there is bug epidemic happening in my living quarters! Could I have been eating and left crumbs on the floor?? That doesn't seem right because I do vacuum.

If anyone knows me I have a real uncomfortable dislike for maggots, grubs, inchworms and well anything worm like. Anything that is small and can create an infestation. Sure who likes maggots! Inchworms are cute when they're bright green and crawling around on the ground or table but certainly not when your sitting under a tree eating lunch or driving a car and finding one crawling up your bare leg in the summer or the little brown crunchy looking one that hitched a ride while you were on your bike only to be seen days later.

Grub worms! Ack no!! As I was sitting at my computer desk feeling anxious, I looked over and saw the little acorns innocently sitting next to my keyboard. All of sudden it just clicks in my head, it's the acorns! As I carefully inspected one of them I found a nice round hole in the shell. But just to confirm my conclusion I looked online to do some research. There it was, the first entry I found was called "The dark side of collecting acorns".  The person explained their account with a similar situation and included a photo of the acorn and the grub,0 will one day grow up into a weevil beetle.

Lesson learned. If you are going to pick up acorns expect there to be a little friend living in there. Surely not every acorn has little weevils living in them but it's a possibility! This shouldn't keep anyone from picking up acorns either but be warned that this could happen to you too! As for myself and any future acorn pickings don't count on it,  I'll just stick with admiring them on the ground where they belong. 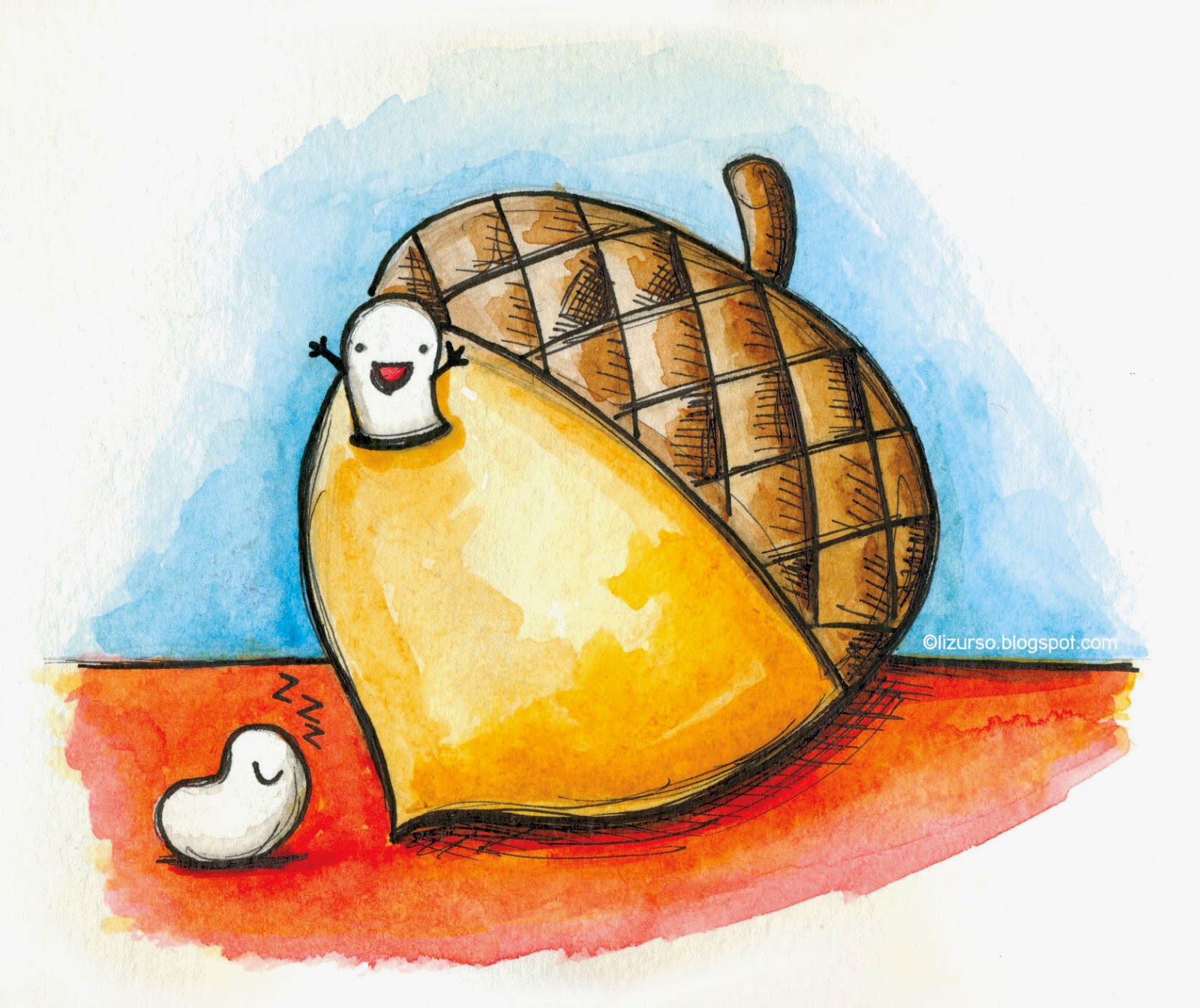 My first card of the year! Haven't done as much card crafting as I use to but I still love to do it! I have far too much stuff laying around not to make my own cards so hopefully there will be more to come. 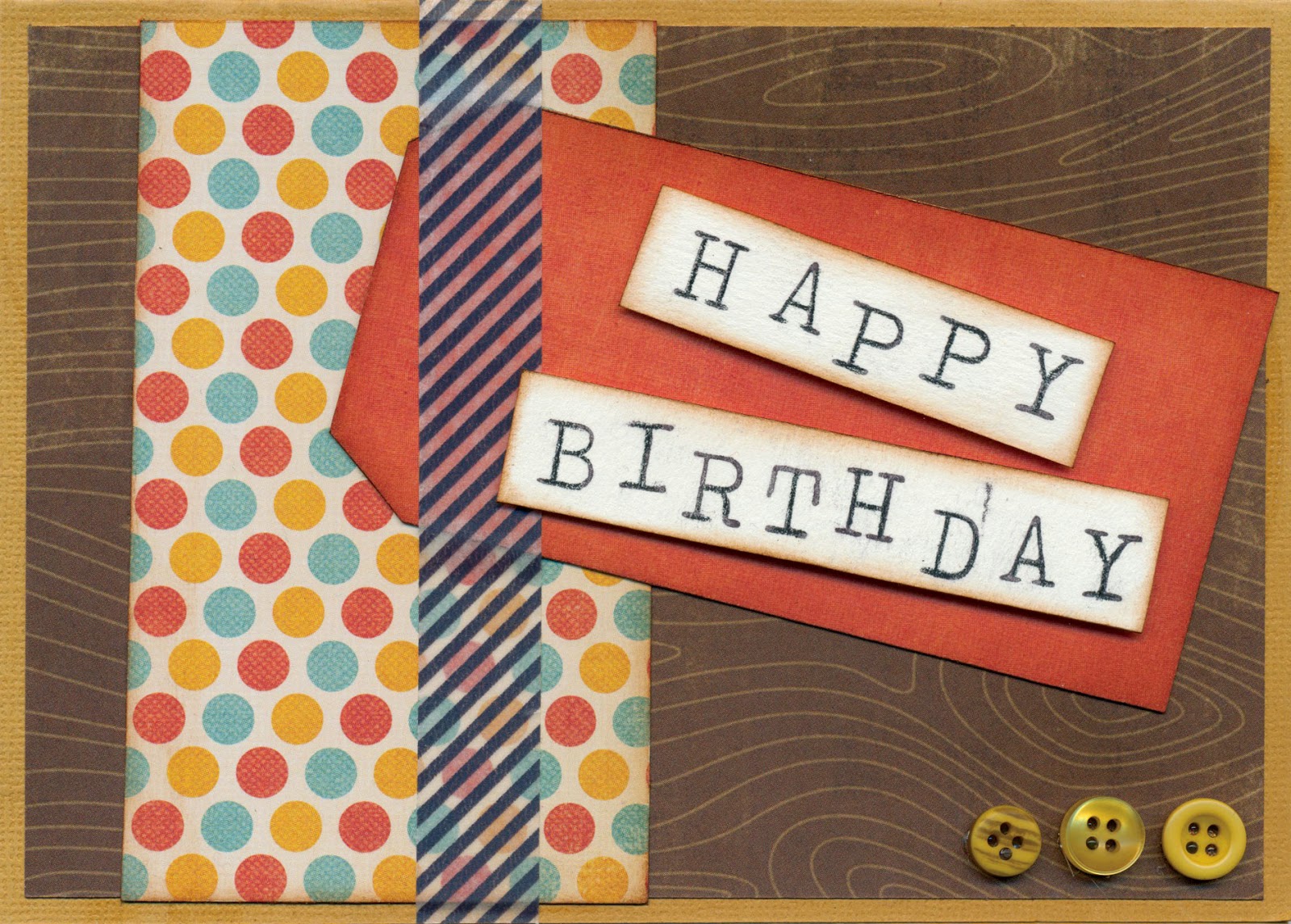 Weekly Watercolor #1 - Fox in the snow

Last year I just wanted to start water coloring because it was something I always wanted to do. Now I would like to just get better at it! Also it'll keep me going on my blog! So with that said here's the first watercolor of the year! The plan this year is to post 1 watercolor a week. We'll see how it goes. It might be a little bit too ambitious but also I don't need to me doing a fully draw out illustration like this weeks! We're going to start this off at #1: 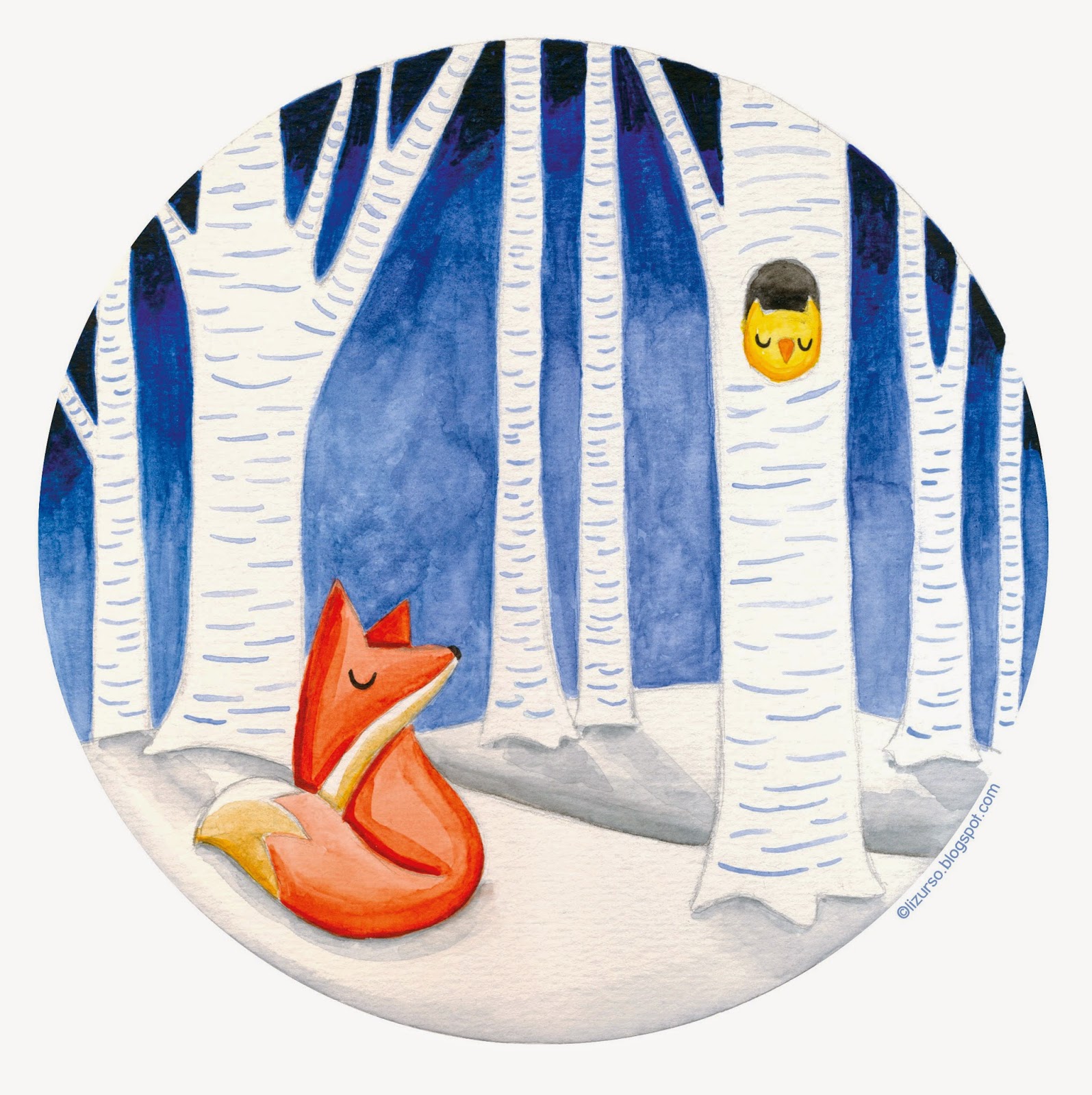