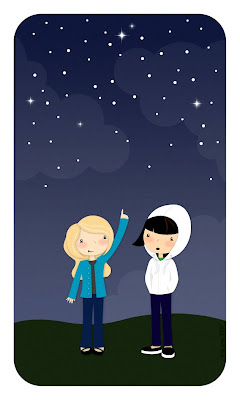 Ok so this illustration was inspired by my recent trip to Vermont. We only spent a few days there but we really tried to make the most of it. I totally love Vermont and it was first time there. I am not exactly sure what I love about it. The country farm roads, the old timey-ness, the scenery, the outdoorsy-ness and so much more. We stayed in Burlington which is pretty neat little college town. I really enjoyed it there. Kerry and I had a list of things we totally wanted to do. I wanted to make use of the bike trail along Lake Champlain, a ghost tour, Ben and Jerry's, Magic Hat Brewery and whatever randomness we could stumble upon. Actually we both wanted to do the same things which made this trip very easy to do. We did everything I mentioned and visited Shelburnes Farms and Musuem which was pretty interesting, fun and pretty. One random idea Kerry really wanted to do was go to a drive-in movie. We both never been to one before so we figured why not see one in Vermont. It definitely was quite experience however we watched a terrible movie! Anyway all of this leads up to before the movie starts and Kerry leaves the car to use the bathroom one last time before the movie begins. It's all dark outside from the lights being turned off awaiting for the movie to turn on and Kerry taps on my side of the window telling me to come outside. Right away I knew what she was going to say since I just caught notice of how visible every single star in the sky was...Insert favorite curse word here! It was amazing! You couldn't even count them. Everytime you looked you would see billions more. Too me the sky seemed endless, space seemed endless...there was an infinite amount of stars.
It was one of my favorite moments there.
Posted by Liz Urso at 6:31 PM 4 comments: 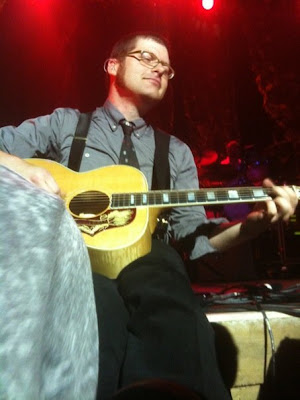 (pictures by Vanessa and Dianne)

Eeeeee! It's so late already but I have to document this! I really didn't want to write a random blog on here about my Monday night ya know and have no art to show but tomorrow is another day and I will aim to have to have something special to put up then. In the meantime I must declare how every time I see the Decemberists they never disappoint. I have never been to a bad show by them. In fact they get better every time! I was a little reluctant to see them this time around, being that it is probably my 5th or 6th time seeing them. I don't even remember and I am sure there are die hard fans that have seen them 30 times or more already.
My friends from work were interested in seeing them since they would be playing locally at the Wellmont in Montclair. Wellmont really happens to be a nice venue and really convenient to go to right after work. I had just spent the last 4 days in Vermont and the Decemberists played at an old, supposedly haunted venue called the Flynn in Burlington last night. I really wanted to see them since we were in Burlington but unfortunatly we were setting forth to be home Sunday evening so it made me finally super duper excited to see them tonight. I had a good feeling about this show!
When we finally walked in there were seats sets up which I was not expecting but we were able to sit in the first row off to the side of the stage. I was soooo excited that I was going to be just a few feet away from Colin Meloy and the rest of the band! It felt heavenly!! The opening act played...(insert name later when I remember) They were really good and I enjoyed them but as soon as they were finished groups of young kids started to move in on our space and grouped along the stage. I questioned a security guard if this was allowed being that there were seats set up and that this was not fair but he said the band will probably let them stay. Too make my story a little shorter..this situation basically pissed me off. Crowds of young teenagers started to invade our space. It caused us to stand by our seats when the band finally came out and eventually we started to inch closer to the stage. I got a little "fresh" with some taller individuals but I wasn't about to let them ruin my time and I needed to defend my space and height!
The Decemberists played two sets. The first one was the entire Hazards of Love album which all I can say in one word is Fantastical. My Brightest Diamond's Shara Worden has the most amazing voice. She was just so out standing along with Lavender Diamond's Becky Stark. Greatness filled the air. I was so ready for the second set and to hear the usual Decemberists songs so I could stand around, dance and try to sing my little heart out some more. By this point after a few shifts in the crowd I had wormed my way to the front along with Dianne and Vanessa. I have never been anywhere near the stage for any Decemberists show! I felt like 18 year old Liz all over again. Standing as close at I could get in a sea of young kids who kept acting like they new everything about the band...and maybe they did. I was sooo incredibly happy. Ok maybe that's slightly exaggerated but I was pretty ecstatic. The best thing was going to happen though and I was so ill prepared for it even though I kept thinking over and over what if he comes close to me....what do I do??? What does Liz do...she freaks out...She totally stares at the guy open mouth, heart beating out of chest, Dianne and Vanessa holding me up and pushing me foward. I reached out to touch him but he shuffled around with his guitar like he was going to grab for hands and instead plops a squat right smack infront of us. I could swear there was eye contact as I just stood there wide eyed in front of Colin Meloy. I felt an arm reached over my shoulder to touch his shoe that was directly resting on the wall right in front of my face. I could have touched his shoe too!! However I just stood there and he crookedly grinned at the boy who touched his shoe in a no-no kind of way...What would he have done if it were me?? Oh well I probably would have had something embarrassing happen to me. It was enough that he acknowledged me standing awkwardly infront of him right then and there. It might hold me over to say that tonight might be one of my most favorite moments of my 29th year a of living! If anything definitely one of the most memorable Decemberists shows to date. I can only hope the next time I go see him maybe I can actually meet the band and have them sign a poster or my arm if it keeps getting this much better....
Ok I am done and Goodnight! 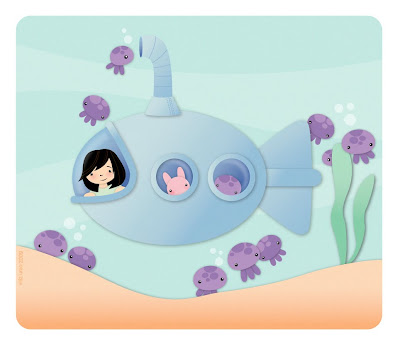 So this illustration is redone from one from one of my first blog entries. I thought this looked much better in this style however the first entry was really only a sketch with some color. Got more illustrations and stuff to post. Coming sooon..like real soon.
Posted by Liz Urso at 12:45 PM No comments: