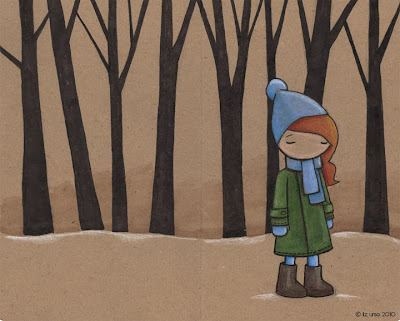 So I wasn't going to post anything from the sketchbook project yet but the thing is is that I haven't posted anything worthwhile in a while! I haven't been completely interested in the last few weeks of topics from Illustration Friday and have been designing some new plush and wasting the entire month of October on my Ramona Flowers Halloween costume. Now that that is done I am just getting started on the sketchbook project. I got a few illustrations going right now but I really like this enough to show on here for now. December is going to be a crazy month if it hasn't already begun now. I got two new plush bear designs to make, a monkey and squid to finish and a ton of stuff to put up for sale on Etsy by the time the new year rolls in, unfortunately not in time for Christmas this year. I am going to start the new year right on track dammit! In the meantime stay tuned for upcoming sketchbook illustrations, Etsy store opening announcement and more of the same old good stuff! Thanks again for stopping by!
Posted by Liz Urso at 10:07 PM